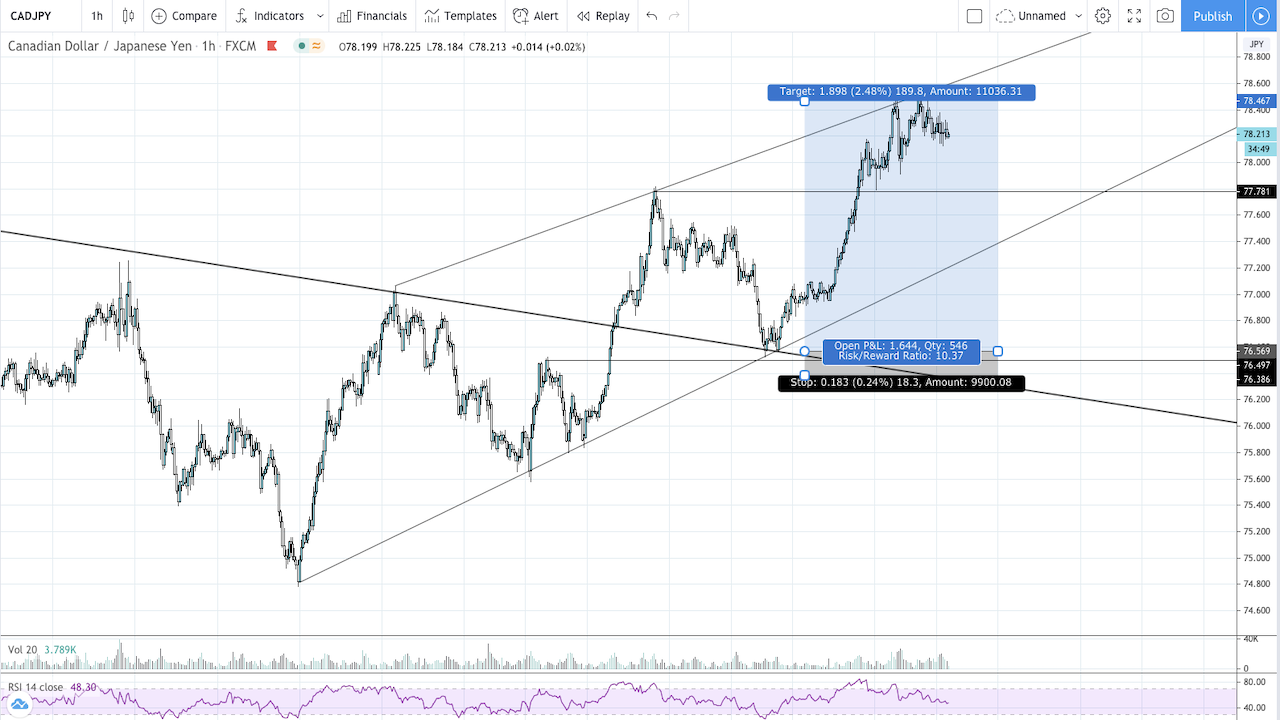 This trade breakdown is by Connor Ballinger, a member of the Duomo Team supporting our Premium Members.

Starting with the daily chart, what do we see?

As we know, the market tends to form these wave-like structures, and we can use these waves to deduce information that helps us make decisions.

Firstly, let's zoom out and look at the larger waves created (I know there are smaller waves within them, but try to ignore them for now and we will come onto them in a minute).

Without using any of the tools, what can we tell about this market?

It is in a pretty obvious downtrend and what can we use to help us interpret a trend?

It may be that there is a trend line that maps the highs of the market but it is so far away from the current price I don’t think it is worth our time.

So, we look to map the lows.

Recently, we have had a large high momentum move down which looks out of character for how the market has moved in the past (which could mean the dynamics of the market have changed and is something we would need to consider). So using the period of time where structure looked consistent, can we find a trend line that looks logical to map the original structure?

Now we have this trend line what can we do with it?

At this very moment nothing.  But if we continued to move up and interacted with that trend line, we might have a solid area to look for short trades that would be in line with the longer-term structure we have identified. Right now it does seem likely that outcome may occur.

So, we have covered the longer term.

Now let’s look into what is happening in the short-term and see what more information we can gain (Note that the time of this trade entry was at the yellow arrow).

Focusing on the period after the high momentum move down what do we see?

Again, we had a nice well structured downward trend with consistent lower highs and lows until most recently.

The last low was higher than it’s previous, which suggested there was weakness in the downwards structure. Then the price also formed a higher high and now we have two consecutive higher highs and lows and a short-term bullish trend.

Using the same method as before, we look to our trend line to map the highs and we have a pretty clear re-test of the level from the other side.

Before we move on, let’s conclude all we know so far.

We are in a clear downtrend and are unsure of where the next leg of the wave may begin. We have a strong trend line that is close to the current price. As we know, significant levels are multi-directional, they attract and repel the price, it is likely we are attracted up towards the level which may then be a good area to short.

We are now in a short term uptrend with a consecutive higher high and low and are now testing the trend line from the other side. Around that short term TL (the yellow arrow), it is pretty realistic that if we get a good set up that we end up pushing higher towards the longer-term trend line.

What do we do now? We move down in time frames and see what other information the market has to offer.

Now we are on the hourly we do the same, see what information is available and try to translate it the best we can.

What we can see in terms of structures is what we have already decided what the daily short term structure.

So now let’s mark in what levels we think are the most important/ relevant to us.

Trend line 1: This unconfirmed trend line across the top covers the highs of the large term wave structure.

Trend line 2: Covers the medium-term lows created in the recent move up.

Swing High 3: A much shorter term swing high, which I would not choose to base my trade entry on but it may be useful to help base a stop loss on (as a potential path of resistance).

Now we have all the relevant levels mapped in and we know the overall situation, our decision making becomes easy.

We had a type 1 and type 2 on both of our trend lines which gave us our double-confirmation for entry.

Stop loss will be located safely below the trend lines and the short term swing high (hard stop loss). If we have close below these levels, we have the chance to exit early for a small loss (soft stop loss).

TMP is based on the closest long term swing as this is the most immediate level that I think may disrupt and potentially reverse the price.

TMP here is realistic and gives us an R:R on 1:2.25 however, there is a lot more potential in this trade since there is a more than reasonable chance that this medium-term structure continues and we at least the current highs. R:R of 7:1

Beyond that, it is also more than likely that we reach the daily long term trend line. R:R of 8:1

Both provide a significantly higher return and are reasonably likely.

I closed the trade on Friday at 8:30 p.m. as I was no longer going to be monitoring the charts and it is very rare that I would choose to leave trades open over the weekend. The exit secured an R:R for around 1.7:1.

However, If I have left it over the weekend, the outcomes would have played out much more favourably as the result ended up being the best-case scenario.