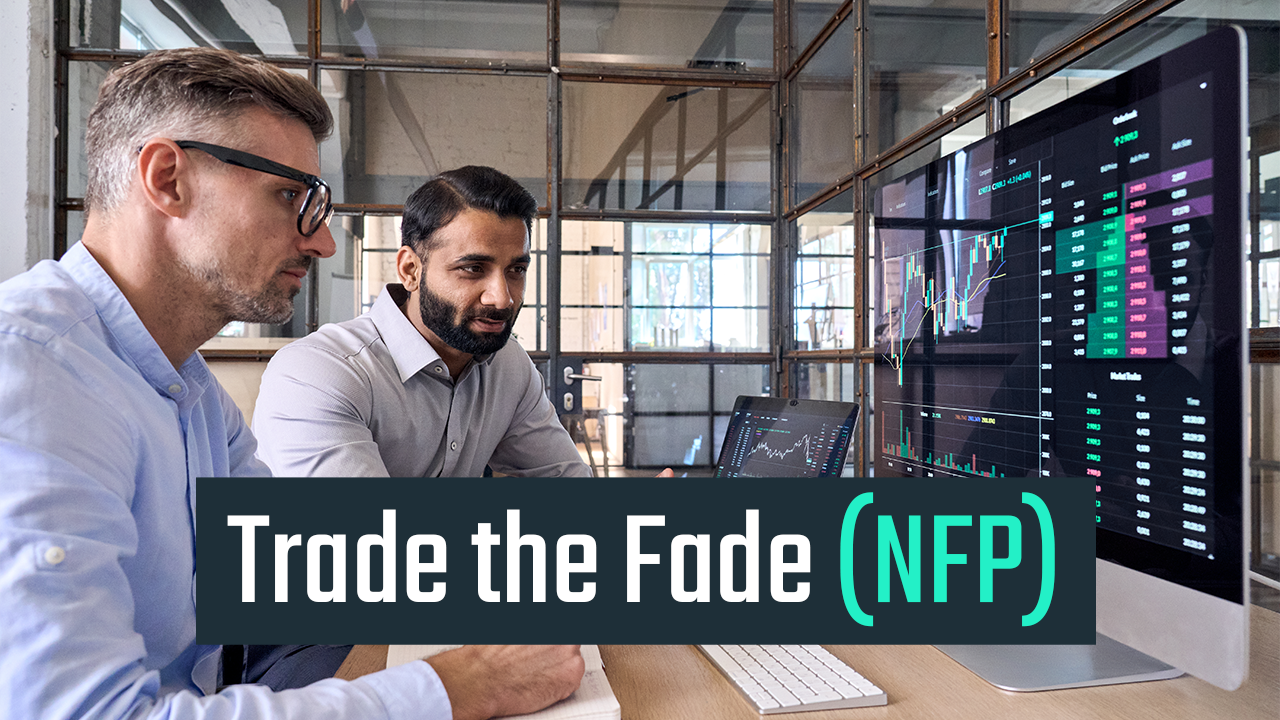 Non-Farm Payroll (NFP) day is an addiction. A gift and a curse.

If you don't know what NFP is, start by checking out our no-BS explanation over here.

If you ignore the details in the actual data itself, the NFP release is just a catalyst for activity.

If the markets are a lake, then the NFP release is a brick being thrown in the centre. It's the starting point for waves of movement in all directions.

Understanding the event in this way will allow us to sail smoothly across that lake. Unlike most traders who try to correlate the details in the data with the market movements - and end up drowning!

The secret is to 'normalise' the spike by using the chart time frames.

Let's get back to basics.

If you're looking at a 1 minute time frame, any collection of large trades at the same time are going to look like a spike on the chart - relatively speaking. For example, if the price breaks out of a zone with a high density of stop losses.

If you take a look at a 5 minute chart, that 1 minute 'spike' is not likely to be represented as a spike anymore. Instead, the same piece of action may be a regular candle size.

Likewise, when there's a smaller economic data release - such as consumer spending announcements. The 5 minute chart may show some form of a spike, but the 1 hour chart may just show a regular candle.

To put it simply - activity in the markets is all relative. The action may be seen as extreme, or barely a 'drop in the ocean' depending on the size of the time frame we use as a reference point.

So with that being said, any high volatility activity can still be traded, as long as you find a way to normalise the size of the spike.

How does this affect our NFP trading?

With the Duomo Method we never trade spikes. We stay away from 'herd activity' markets and only rely on the 'steady state' markets.

This means that we don't want to trade immediately before, during or directly after the NFP release. That's when we're going to be seeing the unpredictable volatility.

Instead, we're going to be trading the markets AFTER the knee-jerk reaction to the release. After the spike. There will still be big moves, but there won't be the unpredictability.

This means we're going to be trading the 'fade'. This is where the market reverses after having an initial strong move in a particular direction. The spike then gets 'faded' and the price returns to a level that's much more comfortable after it initially overshoots its target.

So now we have our first rule for trading NFP:

Of course, this then leaves us with two questions:

If we're looking at low intra-day trading time frames like 5 minutes or 15 minutes, the NFP release is likely to create an astronomical spike on the charts. That just won't do!

This is going to make our analysis impossible.

Firstly, we may not have any reference points to use for our significant levels if the spike pushes us too far out of our intra-day range of prices.

And Secondly, we don't want to trade a herd activity market.

This leaves us with an obvious solution to our problem: we need to normalise the spike. We need to analyse the market on a higher time frame.

We're going to have to leave the low intra-day time frames behind us. They're not going to help us anymore.

Instead, we're going to use 1 hour charts and daily charts for our analysis.

Since we only ever trade at the close of a candle, if we want to trade a daily chart, our first trade will have to be opened on Monday - since we need to wait for the daily candle to close.

So instead, let's begin by looking at the hourly chart.

On the 1 hour chart, unless the NFP release has given an extremely unexpected number, we won't be seeing as much of a spike as we would on the smaller time frames. In fact, it may only be a relatively large candle, but nothing too abnormal.

If that's the case, we have just normalised the candle. It has now been consumed by the regular price ranges that we get on the 1 hour chart.Now our analysis can begin.

Trading in the eye of the storm.

As with any reversal trade, we're looking for Type 1 or Type 2 closes on a significant level. And as ever, it's important to NOT force the trade!

It might sound like a long shot that we're going to find a reversal setup from a one-candle movement that happens once a month. But fortunately, the market dynamics lead these setups to happen very frequently.

Remember, significant levels attract and repel the price - so rather than the price drifting in no-man's land after such a strong move, it is far more likely to run out of momentum and to reverse on an important significant level.

In particular, we want to be looking at our advanced techniques - especially our Fibonacci tools.

However, just because we believe the initial spike has run its course. That doesn't mean the market won't continue trending in that same direction after some initial profit taking.

In effect, we would be trading in the eye of the storm. There was strong action before our trade, and there's likely to be strong action after it too.

We just want to fade the spike and get out of the lake. We don't want to be caught in the storm!

Therefore, we will take a small profit target and exit as soon as possible. This is likely to be 10-20% of the spike.

Yes, it might fade even further (it may even be the start of a full reversal, as the market digests the information from the data release). But there's no need for us to get greedy and end up on the wrong side of a new, strong trend.

Therefore, we have our third and final rule:

Trading NFP Rule #3: Get in and out of the trade quickly. Don't get caught in the storm.

The rules of the NFP game.

Remember guys, trading the NFP release is a gift and a curse. It can present some easy-pickings for quick pips. But it can also create a disaster!

If you are going to trade the release, remember to stick to the rules and trade with a calm and focused approach.

Trading NFP Rule #3: Get in and out of the trade quickly. Don't get caught in the storm.