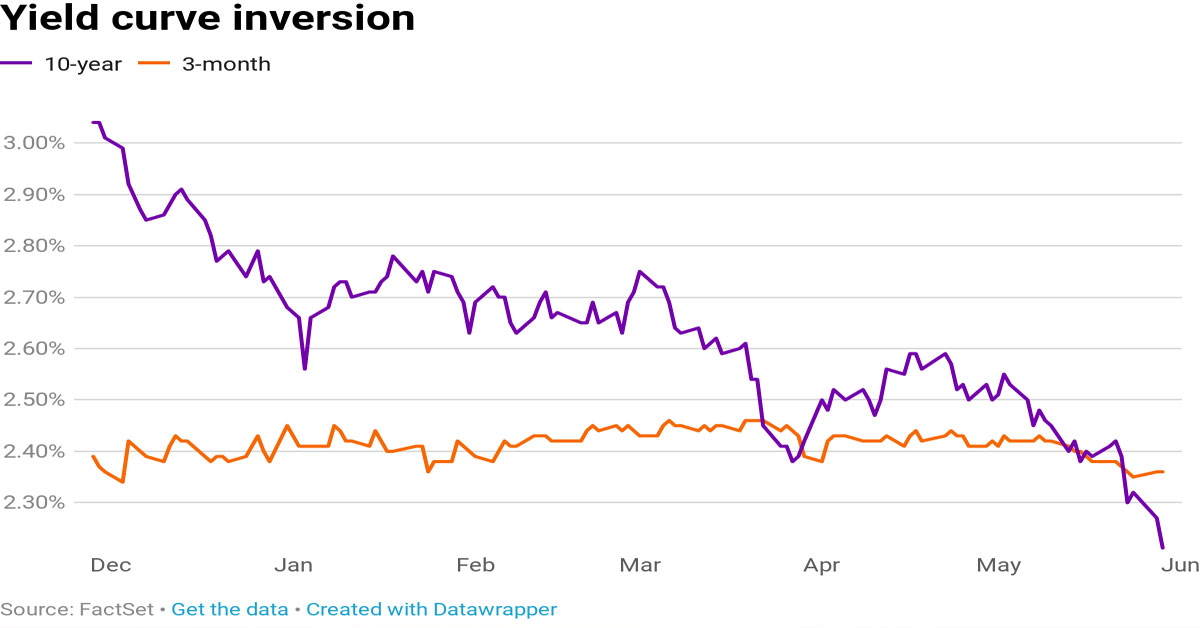 Towards the end of 2018, something ominous emerged that market commentators and economists had been anticipating for a while... The US yield curve inverted!

But what does this mean and why are people in the financial media panicking about it?

What is a yield?

The best place to start is to quickly run through what a yield is, for those that don't already know.

With bonds, you have a range of different maturities. The maturity is basically the amount of time until the original money is paid back by the bond issuer.

For example, you might only want a 1-year maturity if you are focused on the short term or if you're in it for the long haul you may want a 30-year bond.

The payments you receive are known as coupons and the rate of return you'll get on your capital from these coupon payments is represented by the yield, which will vary between different maturity dates.

Typically the longer the maturity date, the higher the yield will be due to the time-associated risks, such as the risk that higher inflation could reduce the value of payments. This means, when they are plotted onto a chart like the one below, you have what is known as the yield curve.

Therefore, if there is demand for a bond, the price will increase (like any other asset) and this will mean the yield will fall.

What happened to the yield curve at the end of 2018?

At the end of 2018, the 10-year bond yield took a bit of a dive, as equity markets began to sell off. This led to the gap between the 2-year and 10-year yields becoming much narrower.

At the same time, the difference between the 3 and 5 year treasury yields dropped below zero, becoming the first part of the curve to invert and marking the first time the yield curve has inverted in over a decade.

‍"Yeah, yeah, big deal. Why does this matter?"

‍Well, for some economists, investors, and traders the crossing of yield curves is a signal of the rapture. The end is nigh and we all need to prepare for doomsday in the financial world.

After all, historically in most cases when yield curves invert, a recession has followed.

In fact, according to a paper released by the Federal Reserve bank of San Francisco in 2008, forecasters actually placed too little weight on inverted yield curves when projecting declines in the economy. They even found that yield curves are better at predicting recessions than professional forecasters.

What does the inverted yield curve mean?

Now let's talk a bit about what this all actually means.

The difference between the yields can signal how confident investors are that the economy will continue to grow.

If the yield on a 30-year bond widens against the 10-year, this is a sign that investors expect the economy to continue growing, as there may be more appetite for riskier investments with higher returns.

However, when this reverses and the spread between yields close or invert, it can be a sign that investors are less convinced that growth is going to continue. They may think inflation is going to drop and real rates are going to fall, both of which tend to happen during recessions.

This means investors would rather hold the less risky longer-dated bonds.

The primary yields to focus on are the 2 and 10 year bonds. These are not negative yet, but in December the spread between the two was the closest since 2007.

That must means it's almost time to pack your stuff, quit your job, build a boat and prepare for the doomsday, right?

Well, not just yet.

Although a yield inversion usually precedes a recession, it's not a very good indicator for actually timing a recession. In fact, the timing can vary anywhere from 2-months up to 2-years.

For example, when the yield curve inverted in 2006, it was two years until the 2008 financial crisis.

Critics of the inverted yield curve as a predictor

Using yield curves as a predictor of recessions definitely has its critics, such as Ben Bernanke, the former Chairman of the Federal Reserve.

He believes that the yield curve has lost its predictive power due to the market distortion caused by central banks through regulatory changes and quantitative easing.

Bernanke argues that foreign money has been flooding into long-dated US Treasuries which would reduce yields.

However, rather ironically when he became the Fed Chairman in 2006 and the yield curve inverted, he told everyone not to worry about it.

“I would not interpret the currently very flat yield curve as indicating a significant economic slowdown to come,”

...We know what happened shortly after.

His predecessor, Alan Greenspan, also believed that the inversion was a false recession indicator, due to heavy demand suppressing yields.

But as Sir John Templeton said, the four most expensive words in the English language are "This time it's different".